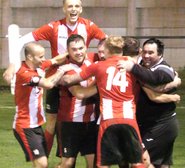 Bodmin Town arrived at Kimberley Stadium on a wet Wednesday evening to play their part in the Cornwall Charity Cup. With both teams seemingly a worthy force in the upper echelons of the South West Peninsula League (West Division), it could well have been a very tentative and curious approach from both teams. It seemed to be so at first, but in the end the visitors to Kimberley Stadium that night would not have gone home disappointed if they’d come for entertaining football.

Scott, our Football Secretary, joined me for most of the first half of the game. We exchanged thoughts on what was quite a changed Ashes team. Top scorer Sam Hughes was out injured, as were numerous midfielders. The squad had been slowly depleted over a busy couple months. Seconds’ in-form Scott Coombe started the day in midfield, and I was curious to see how he’d get on.

I remember, somewhere around twenty to twenty-five minutes, I told Scott that I’d be struggling for highlights for the video (which you can see on YouTube’s Ashes TV, by the way…) and at that point I was correct. There were attacking moves for sure, but compared to previous games I’d filmed, there wasn’t much in the way of highlight-worthy action.

However, it was one of those games where it became more and more of a thriller as the game went on. It started just after half an hour, when Reece Thomson was adjudged to have been brought down in the area. David Barker converted to put the Ashes ahead.

The lead didn’t last long. Soon after the restart, Bodmin were awarded a free kick midway in the Saltash half. Bodmin’s Mitchell took the shot, and boy did he take it like he meant it. He picked out the top corner like Phil “The Power” Taylor would pick out double-tops. Ryan Rickard barely had a chance.

I recommend watching it on the Bodmin highlights video, on the YouTube channel Ashes TV. And no, I’m not cheekily advertising the channel. I mean it. It was a stunning goal.

That goal seemed to shake Saltash. Up to that point, they were certainly not looking like the team that humbled St Austell a few days before, but now it looked like Bodmin could really push them back. Just before the whistle went for half time, Bodmin took full advantage of the sloppy Ashes, with Dan Jennings tapping in from a Tallan Mitchell cross; a goal that seemed to happen far more easily than it should have. 2-1 to the visitors at half time, and the hosts seemed dejected. The management more so.

The hope for the Second Half would be that the Ashes would pick themselves up by the scruff of the neck and steal the game back. Alas, that wasn’t to be the case. The passing seemed to be even more wayward, and straight from kick-off the ball was bunkered in the Saltash half. It was only a matter of time before Bodmin would pounce on a mistake, and Dan Jennings was again the beneficiary, despite his initial lob rebounding off the post. He was able to capitalise on the loose ball, and Bodmin had a two-goal lead.

Saltash continued to look lethargic; almost beaten. Their opponents were thoroughly in charge of the game, and seemed to be the only team stringing passes together. There was only one way the game was going.

Something started to happen, though, somewhere after sixty minutes. Things started to click like they hadn’t for most of the game, and slowly, but surely, the Ashes started to move the ball towards the Bodmin half. Soon, it was spending most of its time there. Some sense of hope was returning, and when Saltash started to create chance, there was a definite feeling that the Saltash Giant was awakening from its hour-long slumber.

They clawed one back on seventy minutes. Daniel Lewis weaved his way through the defence for the second time in a couple minutes, trying to pry his way through. Unsuccessful, he nudged the ball away, and it came to Thomson. Thomson laid it off, and David Barker came charging in to slam to ball into the far corner from twenty yards. With his second goal, the comeback was on.

I recalled that, before the game, he commented on how I’d missed his goal from the St Austell game, since I don’t film away games. Well, I’ve got two this time, Barks! Just make sure that you hit the next one a little slower so my camera can keep up, huh?

A revitalised Saltash suddenly no longer looked so timid. They started to push for the third that would take the game to extra time. Despite the clock steadily ticking down, they didn’t rush. They bided their time, and their rewards came just a few minutes before the end. Callum O’Brien somehow found himself with the ball at the edge of the box, and he crossed in beautifully for Reece Thomson to bring Saltash level from close range. The relief was huge.

It could have been over even before Extra Time. Saltash had their tails up, but there was only so much time, and the game would have to be settled with another thirty minutes at least. Still, it felt that Saltash had acquired the upper hand. They looked more composed, and more incisive. The Bodmin management seemed to be more interested in getting into shouting battles with everybody and everything in their vicinity. They even threw a little verbal jab at me, and I hadn’t said a word to them all game!

The final goal was scored just a minute before the end of the first half of extra time. Daniel Lewis took the ball back into the Bodmin area after a weak clearance, and dinked the ball right to Sam Farrant, who knocked the ball past the keeper and into the far side of the net. With the comeback complete, the hosts celebrated with delight.

The game was done. The second half of extra time saw both teams tiring, and the final whistle eventually came, signalling United’s progression into the next round. Phew! What a game!

Next up in the Durning Lawrence Charity Cup, the Ashes will face Godolphin Atlantic at Kimberley Stadium, on Wednesday the 27th November. In the league? Same opposition, same ground, and that’ll be Saturday 28th September, 3PM. Be there.