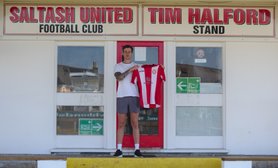 The club is delighted to announce the signing of 25-year-old striker Mike Smith. Mike was part of the Plymouth Parkway side who won the 2017/18 South West Peninsula Premier Division title and went on to play step five football in the Western League.

Having recently left the Navy, he is able to commit to football once again and has decided the best place for him to do that would be at Kimberley Stadium.

Smith joins the Ashes first team setup and is available for selection as soon as the green light is given for football to return.

"It was a no brainer so sign for Saltash. It’s a great club. As soon as I knew there was interest, I said yes straight away. It’s a club that would have gone on to push for the league title last season and that’s something we will be aiming to achieve this season. I can’t wait to get started."

Ashes Manager Dane Bunney said “We are obviously thrilled to welcome Mike into the squad. He will offer us pace, power and unrivalled aerial prowess. He had a good level of experience behind him as well. He has won the league in the past and played Western League football. It’s a deal that works perfectly for both sides. "