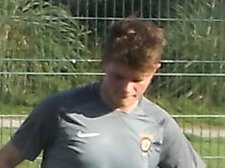 Saltash United Reserves are delighted to announce their captain for the upcoming season. JJ Gil will step up to the role while Tom Jane and Lloyd Jones will provide support in the Vice Captain role.

Manager Robin Duff (also SUJFC Chairman) commented ' I am absolutely delighted with the leadership group now in place. I have known JJ and his parents and sister for many years as a Saltash United Juniors player. This season he had offers to play South West Peninsula League football but he has stayed loyal to his hometown club. He is already involved in leading training and his involvement is a sure sign that we are looking forward and not back. He will be ably supported by Tom Jane, TJ, who has been a pivotal player in the team for the last four seasons. Over the years I have seen him play and admired his quality but watching him train and how he encourages those around him takes him to another level. As for Lloyd, top scorer last season, he was always going to commit to the club, from day one we were talking about his role in the team and he knows what I need from him and I know he will deliver.' Robin also spoke of two signings he can confirm. 'Ash O'Rourke has come over from Torpoint. He's a great signing, he will add experience to what is a young group of players, and he is a character.' Robin also confirmed the signing of Joe Coutts. 'Alex Gard insisted I look at him and within twenty minutes I wanted to sign him. Good technical ability, versatile, not overawed and has settled well into the group. Robin Duff has also brought in three players from last seasons third team, Tom Bullock, Jaden Wood and Tyler Holter 'they have earned the opportunity and look the part.'

Robin Duff also announced the visit of Callington 1sts and 2nd team to Kimberley to take on the St Piran side and Saltash's Duchy premier side on Saturday August 22nd, with 1pm and 3pm kick offs. 'We played this double header last season and it worked well for all concerned, our fantastic club staff were supportive of it and we were happy to put it on again.'